Why is "User" written twice when populating a struct? 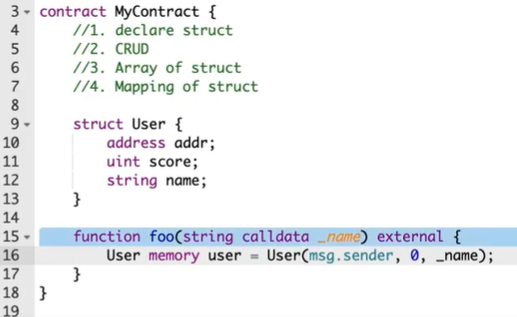 On line 16 he populates (EatTheBlocks on YT) the struct with the three variables which are addr, score and name. But I do not know why there is another “User” next to memory (first word on line 16).

If anyone can explain what “User” means before memory, that would be great.

this is because structs are user defined datat types . the the user is of type user and in soldidity if you want to declare a variable you need to typecast it. hence the type cast of User on line 16 as you see

Are you following me haha, just joking.

I am not sure what you mean by typecast.

If you are creating an instance within the struct why do you need to have “User” before memory if the variable name “user” (after memory) is stated?

You are creating a copy of the struct and calling it “user”, and specifying which type it is in front of the memory. It does not point to the “User” struct, but is using "User"´s type to create a copy. Then at the right side of the equation mark you are specifying which values this copy you just created is equal to.

I hope this clarified line 16.

Why do you need to declare the type of struct? And what are the different types of structs you can have?

no your missing the point. strucs are user defined data types so they can be anything you want them to be. just like an unsigned interger is a data type is a uint, a struct is just a data type of the name we give it, e.g User, Vote, Transfer. so we need to type cast it when we initialise it

Breaking it down and thinking about like this should help …

Let us know if it still doesn’t make sense

I did find this quite difficult to wrap my brain around but makes perfect sense. What other uses does the local variable name “product” (lower case) have. For example can it be called to be used somewhere else in the code etc.