Welcome to the discussion about this lecture. Here you can ask questions or post feedback about this specific lecture.

Pros and Cons of SQL database:

This is very interesting!

I ran a small healthcare practice for 20 years.

I can now talk about it now with professionals. Here was the centralized IT infrastructure (I was a littleguy) one personal computer as server and about 20 client computers.

Anyway maybe 5 years ago there was an upgrade recommended to SQL. I presume the MS Access DB was just one big table? The practice management program changed too so I presume it went from C+ to VB.NET???

The rational advice to upgrade was not just for security, but the main reason was SPEED

So what they had to do was a migration from MS Access to SQL. Would that be restructuring by chunking the MS Access database to several smaller tables?

Anyway there was a significant improvement in speed. But you mentioned that NoSQL is faster so was the dramatic speed increase from the .NET application vs. the old C++???

Frankly I didn’t have a clue what was going on, just trusted the IT guys…now I know why at least and as I progress in this course I will find out where we are going should I re-enter the game again!

But you mentioned that NoSQL is faster so was the dramatic speed increase from the .NET application vs. the old C++???

Hello sir, NOSQL could increase the speed of the database, but remember that NOSQL is only for those databases that are not in any need of relationshipt between database.

I presume the MS Access DB was just one big table?

It could be many tables, with relationshipt between them, thats why probably your IT management choose this one instead of NOSQL.

If you have any doubt, please let us know so we can help you!

Thankx Carlos, I regretfully exited the business late last year…my baby but in hind sight with current events I could not have been blessed more.

I just had a poor understanding of my IT tech stack and in Calgary, Alberta where I was located there just wasn’t a service out there that could cost-effectively manage the small enterprise. Corporate structures have entire IT departments but the smaller mom and pops just cannot afford one.

so what I did over the years was just learn little bits and pieces at a time and assembled an infrastructure that worked…was really a piece of sh*t compared to what it could have been if set up properly…but it worked for 20 years…it was a LADA, wasn’t stylish but for the most part rarely let me down.

The biggest leap of faith though was early 2019 switching from cisco Unified PBX to virtual PBX by RingCentral…was sweating bullets, but it transitioned well…was able to use all the cisco IP phones, and it actually was easier to use, more reliable and a cost savings (the cisco PBX was 2 years outside its service contract)…

anyway, now I am doing this…which is great because I never really understood the backend - frontend operation ever to begin with.

@ivan I think this answer is incorrect. Whenever you know that the data is semi-structured, you should use NoSQL…correct? But the question is asking “When should you use an SQL database?”

This is a question in the QUIZ Databases (Question #1) 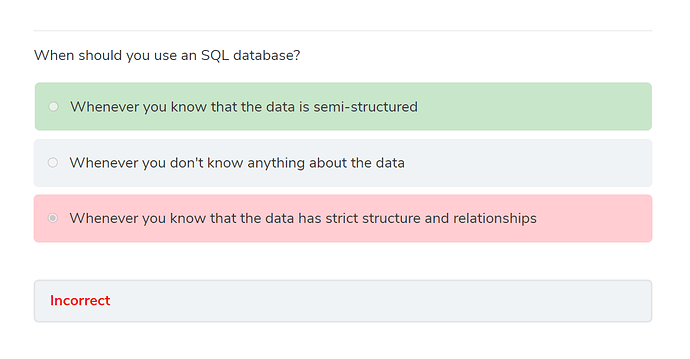 Can you confirm? or clarify?

Hey @JackieBiz, hope you are great!

Whenever you know that the data is semi-structured, you should use NoSQL…correct?

Any data with some kind of structure, must be made with SQL, the only way you do it with NoSQL is when there is not need for a structure on the data (relationships).

So the correct answer should be the first one (“semi-structured”).

although cannot modify the rows or tables if needed; due to security and fixed structure.