Welcome to the discussion about this lecture. Here you can ask questions or post feedback about this specific lecture.

@ivan, the final quiz question might be not consistent enough. See the explanation of my opinion below :

Not sure why “NO SQL” database is not applicable to the mission critical finance app. I guess, it is supposed to have a “consistent” trait mentioned in the CAP theorem.
Maybe it should have “availability” trait given my understanding of “mission critical” is correct. It does not really matter if the database engine has SQL as a query language or not.

Here are some good examples :

P.S. Here is a good book on databases to mention if you have not done so yet Seven Databases in Seven Weeks: A Guide to Modern Databases and the NoSQL Movement

All good until now thanks for the course is really helpfull

Thanks for these added details.
After that, I do think the 3rd quiz question should have been better precised: for instance, atomic updates needed or not? with excluding answers

Very helpful - thank you all.
Technology has come along way since I was in College, very enlightening, this digital world.

Could someone please advise on this and correct me if I’m wrong? Thank you in advance. 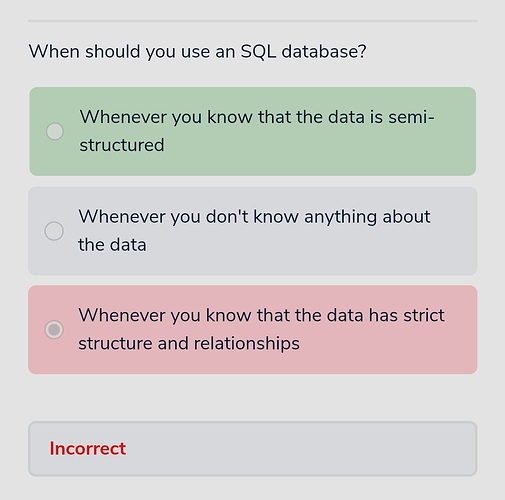 Can someone give me more explanation on this. From my understanding SQL is all about well structured and Relational data, why then is the answer wrong?

Thank you @thecil for the clarification.